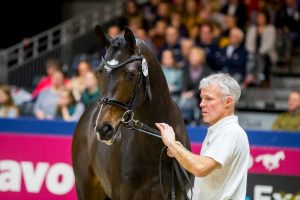 Lennox W (Grand Galaxy Win T x Rousseau) showed suppleness, good body use and powerful hind leg use during the second round viewing on Friday. He was invited to the third round viewing. From a group of 4 sons of Grand Galaxy Win T and 2 of Gotcha-Utopia, the inspection committee invited Lennox W to the champions test on Saturday. He was also invited to the performance test in Ermelo. He was described as a functional mover and handy stallion who also has a very interesting pedigree. Lennox W is a son of the full sister of Blue Hors Zack, who is successful in the Grand Prix dressage. 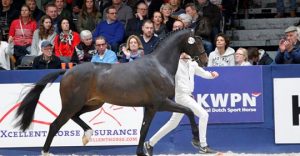 During the champions test on Saturday, Lennox W did his utmost best to convince the inspection committe of his quality. In a group of 7 fantastic stallions he ended as the runner up. "The stallion himself has a lot of technique in trot and a lot of flexibility and in the canter the easy flying changes were striking." It's really stunning that the breeders/owners gave us their confidence to train this special horse, especially with this result. Lennox W is a fantastic horse to work with.

Our congratulations to Bas and Trudy Wilschut with this fantastic result. We wish you a bright future with Lennox W!

On November 27 Leo the Lion (Quasimodo Z x Burggeraaf) of breeder/owner Roeland Plaisier  visit Ermelo for the first round viewing. In the beginning a little hasty but after that some very correct jumps. A well-deserved invitation to Den Bosch! 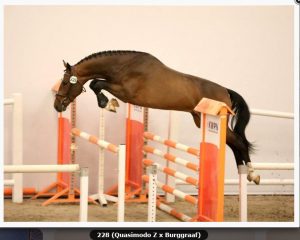 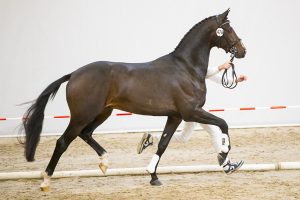 Congratulations to Bas and Trudy Wilschut! . 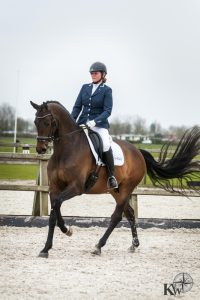 On Friday was the first test for Inuna in the M1. Inuna has 3 very good basic paces and always does his best. The warming-up in Heerjansdam is right next to a train track, which he found exciting. He happily turned the tension into positive energy, improving his self-carriage. Nicol and Inuna rode a good test without major mistakes. The result was an unexpected first place with 66.0%! On to the final on Saturday.

On Saturday, Inuna also did a good job. During the test he was a bit more calm and easy than the day before and some parts could have a better attention to detail. But very satisfied with this 5 year old gelding. With this second test, they finished at the fifth place with 67.4%.

On Saturday morning was the first test for Hitch in the Z1. Hitch has a powerful walk with a very good overtrack, a nice active trot and canter with enough jump. Hitch has made good progress over the past few weeks, the collection has been improved and in the simple changes she's stays better on the hind legs. During the first test, Nicol and Hitch had some very good parts but also made a few mistakes. They got a nice fourth place with 63.5%, so Hitch was also allowed to run the final.

During the finals, kür to music was in the adjacent arena. While exploring the arena, Hitch also liked the music, after a few jolly transitions trot-canter, she lost the excitement and rode a good test. Even in this second test, improvement is in the final details. The test was rewarded with 64.8% and a fourth place!

The final total of the two tests came to 64.15% and a fourth place!

With both horses on to the Hippiade in Ermelo on August 31 and September 1. A few more weeks to work on the details.

This weekend I went on a competition with two horses.

The 6-year-old elite mare Hitch (Chagall D&R x Tuschinski) has developed well and she showed this during the Z1-debut at riding school Oostmoer in Stad aan het Haringvliet. With a second and third place and two victory points thickly satisfied.

Nicol presented the 9-year-old mare Envy Me (Tango x Kennedy) in the ZZ-licht class. The challenge with Envy is to be able to ride a relaxing test. We know that the flying changes are not correct yet and therefore we mainly went on to gain experience and to learn how to cope with the tension. At Koningsdag, Envy was very excited during the beginning of the warming up, but this time the tension was quite quickly under control and flowing away. Also when exploring the competition arena she felt reasonably quick relaxed. During the walk and trot parts she showed very nice pieces with a lot of 7-ens. The goal of riding relaxed tests had been achieved, now we first need to work on the flying changes. We were satisfied about the results with two gain points and thus a ZZ-licht ranking for Envy Me. 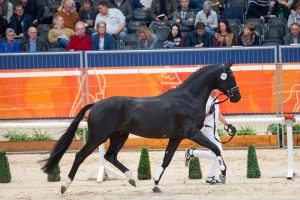 Khan S (Negro x Jazz) was allowed to show his qualities in Den Bosch during the second round viewing. The big black Negro son, bred and owned by the Fam. Spijkers, walked a super round showed his moving talent which was good for a referral to the third round viewing. The comment of the inspection committee: "Negro expresses a strong mark on breeding. This son of Negro comes from a damline full of predicates, the first 4 mares from this damline have brought several above-average sport horses. The stallion itself, which moved with a lot of balance and carriage, is invited for the performance test." 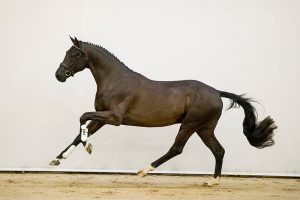 Last week we were with 4 stallions in Ermelo for the first round viewing of the stallion inspection. Khan S, a descendant of Negro x talent (Pref Keur presents Father Jazz) x Koriana (presents Pref Sport. Dr. Father Rubinstein), may go on to second round viewing! This very tough Negro showed only a small piece of his qualities on the first round viewing but still sufficient to convince the jury to send him to the second round. Khan S, bred by the C. Spijkers-vd Voorst, is a horse from a top line that slowly became more confident during the test. A wonderful character with great talent!

The other three stallions all showed three good paces with enough stride length and suppleness, but should show more power and carriage in the trot and canter to go to Den Bosch. These stallions will certainly make it as a sport horse in the future:

All stallions were top prepared by Annemiek de Koning!
We wish Bart and Christel Spijkers a lot of success in Den Bosch. 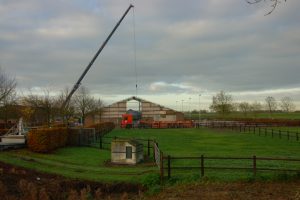 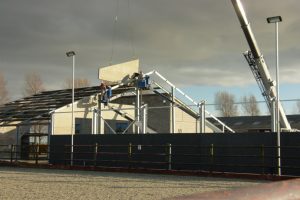 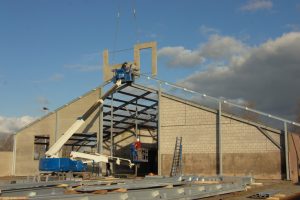 The evolution of our company towards a functional and modern training stable is in full swing. This year we scaled down the rearing to be able to convert the "old cow stable", where young horses were housed in the last 10 years, to an inside arena with 10 boxes, reception room and apartment. An inside arena will give us the opportunity to ensure continuity in the training. In the reception room you can enjoy watching the horses when drinking a cup of coffee/tea.

We look forward to the final result: 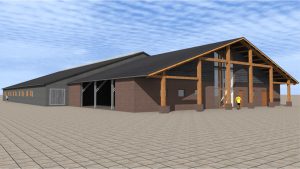 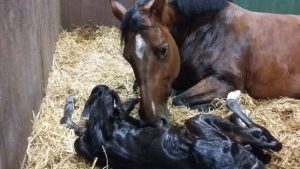 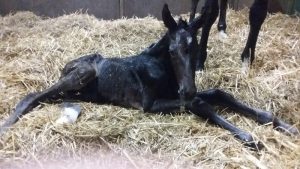 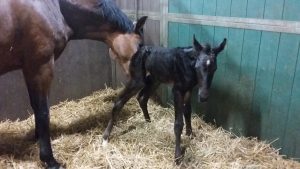 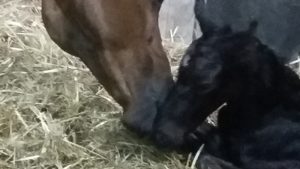 After 10 years of rearing we will focus on the training of young (dressage-) horses and preparations for mare and stallion inspections. The rearing is scaled down to 10 foals per year intended for own horses and a limited number of horses of customers with a view to inspection and sport. In the first months of 2018 the current group housing (The Old cow Barn) will be rebuilt into an indoor arena, 10 boxes, reception room, saddle room and apartment for interns, staff or other guests. This change also involves a new website. Meet our services, horses and the team.